Amid the sound of piercing electronic beeps — and a mechanical kind of wheezing white noise — a researcher speaks: “So imagine your baby is sick. You think it could be a kidney problem. The nearest hospital is a day’s drive away.”

Listeners travel into this scenario as the undergraduate scientist begins listing the challenges facing the baby, some of them life-and-death: lots of blood drawn using a painful process, weeks before results can travel to and from a faraway lab.

“Now imagine an alternate scenario,” the voice says, and begins to offer hope that something will change for that little baby.

This is Victor “Tori” Puoci’s first episode of his science podcast. As it turns out, science can help that baby far away from medical help. Puoci believes there is reason for everyone to care about science — and he’s willing not just to say why people should care, but to shape the stories in such a way that people do care.

Produced with the familiar cadence of NPR’s “This American Life,” Puoci’s podcast, “At This Point,” wants to make science accessible by exploring topics that, At This Point, may seem too complex to understand. Topics like a small device that can run a blood test without expensive machinery or even electricity, and maybe help save a baby’s life.

A podcast was not on Puoci’s college bucket list. A fourth-year Honors biochemistry and molecular biology major, Puoci once — back in early high school — thought he would be a doctor.

Then he thought maybe biomedical engineering, “because that sounded fancy. I never really knew what specific kind of biology, chemistry — any of that stuff — there was until my senior year [of high school] when I did a unit on biochemistry and went, ‘Oh. This is what I want to be doing.’”

But one required class, Scientific Theory and Practice, put a 90-degree bend in his assumed trajectory.

The small class of 20 or so students tackled everything from methods to ethics: What responsibility does the scientist have to the public? How and where is research reported – only in journals read by scientists? Is it written in a way everyone can understand?

“I was wrestling with the idea of science being inaccessible,” Puoci says. “I wanted to continue those conversations about why isn’t science more accessible, and how can we make it more accessible?”

So he delved more deeply into the questions with his professor after nearly every class, searching for an answer for the problem discussed the previous hour. Did the answer make sense? What were the drawbacks? Did alternative options exist, and if so, what was the fallout?

He discovered he was just as passionate about the questions as the answers. What does science owe society? How responsible are scientists for helping the public understand science’s methods and discoveries? And what could he do?

“At This Point” took seed in Puoci’s mind.

Paying for a podcast

“We [scientists] all know we do really cool work, but we need to tell others,” he said. His advisor recommended he add to his major a certificate in Scientific, Technical, and Professional Communication. The certificate includes classes like media writing and technical writing, to learn how to do the telling. “And that got me to this project,” he says.

What if his science experiment used words instead of chemicals?

What if it were on the internet instead of in a lab?

What if he explained complex science methods in terms his grandparents followed, and used language his three younger sisters understood?

Puoci proposed a science podcast project to his mentor. A podcast focused on undergraduate research, produced for the general public, using immersive storytelling — inspired by WNYC’s Radiolab and NPR’s “This American Life.”

“I think science is really cool, and I think other people should have access to understanding how cool science is,” Puoci says. His mentor appreciated his passion, but also cautioned him. As non-traditional as the proposal was, it may not gain funding.

Still, Puoci submitted his proposal to Summer Undergraduate Research Experience (SURE) through the College of Science – a competitive program supported by donors that funds undergraduate summer research opportunities for science students. His proposal was accepted. 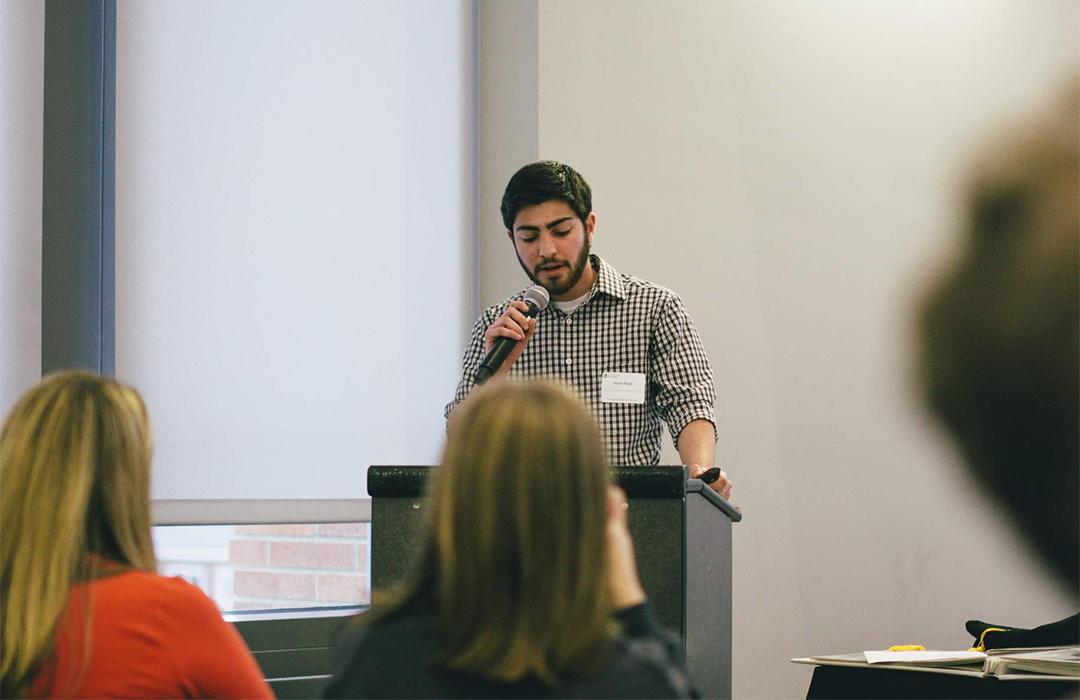 “It was really awesome to see there was that support for a project like this, and the pursuit of science communication as a field,” he says. “It has shown me that I’m going in the right direction.”

Enticing others to care

In May 2019, Puoci dove into his project. He had a multilevel learning curve, one he could not have tackled without the SURE funding. The technical curve included the most basic: how to use audio recording and editing equipment and load interviews online. For the communication curve, he gave himself a crash course on the history and emerging work in the field of science communication.

“Instead of moving home for the summer or working multiple part-time jobs, I was able to spend time teaching myself,” he says. “Also because of this funding, I got to attend a conference at UC Irvine, ‘Reclaiming STEM,’ that was focused on diversity and inclusion in science communication. Connecting with this community really confirmed that I’m headed down the right path.” He remains in touch with faculty and staff from other universities who are interested in a similar project at their schools.

The conference also helped with the final learning curve: how to get people to care.

“It was definitely difficult at first,” Puoci says. “I wanted to just be able to say, ‘You know, science is cool and interesting,’ and that be good enough. But you know, there’s a lot of other things that people need to be engaged with, whether it be, ‘Is this a fiscally responsible pursuit, to work on science communication?’ There are questions of, ‘Are you just dumbing-down the research of the work? Researchers work so hard; why should it be put in these less complex terms? You’re going to lose some of the value of that work.’”

He produced his first podcast in September 2019, and initial response from listeners is encouraging.

“In putting out these podcast episodes … people just think it’s cool. One of my goals was creating an episode I can send to my 11-yr-old sister and my grandparents, and have everyone understand it. And I think I’ve achieved that — or maybe they’re just being nice and saying that.”

Immersing his listeners in science

For each episode, Puoci researches the topics by immersing himself in that field of science. After learning about the poker chip-sized blood filters for use in remote areas, for example, Puoci spent two days at the coast with an undergraduate research student, looking at the role of sea stars and other predators in tide pools. With another researcher, he explored ocean sedimentation, and how students are using samples of the ocean floor to make a history of flooding and how ocean rising occurs. He learned about making a green lab certification at OSU to promote sustainability and limit their carbon footprint, and interviewed a researcher about serotonin levels in the brain.

At This Point is unique. It focuses solely on undergraduate researchers. Instead of talking heads in an interview, Puoci takes the listener into the experience — beeping and mechanical white noise included. And it’s a one-man show. Rather than a staff of researchers, interviewers, producers, and marketers, he’s learning all the roles. He limits his podcasts to 15 minutes; just enough, he hopes, to make you want to learn more on your own.

“Science affects our daily lives,” Puoci says, “influencing the decisions we’re making about what foods to eat, or where to live. On a larger scale, science being more accessible will give the public an opportunity to make more informed decisions, like whether to vote for taxes on carbon, or what is being done with damming a river. If you understand the science behind those choices and how it impacts or will impact your life, you can make a more informed decision on how you’re voting, or what products you’re buying.”

When Puoci was in the sixth grade, his class designed science experiments. The teacher made them spend weeks working on procedure writing for their experiments. “He would give us very detailed edits, and say, ‘If I can’t follow this stuff, you have to revise it,’” Puoci says. The need to communicate so others can understand has never left him.

“People have an inherent curiosity about the world,” he says, “and if I can do anything to help access that, and help open the possibility for people to learn more about the world, I think that would be cool.” 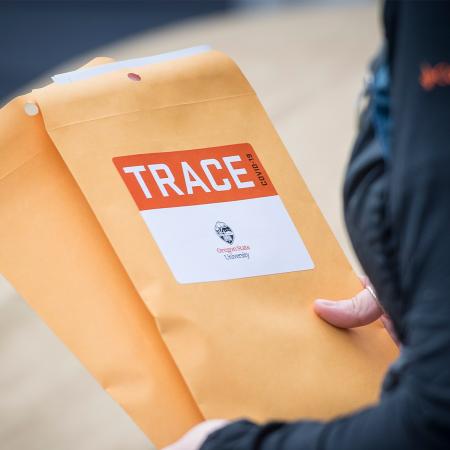 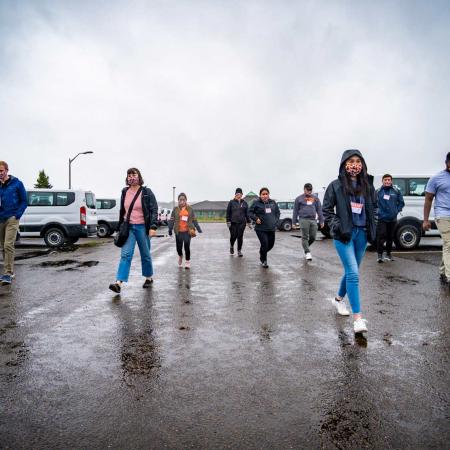 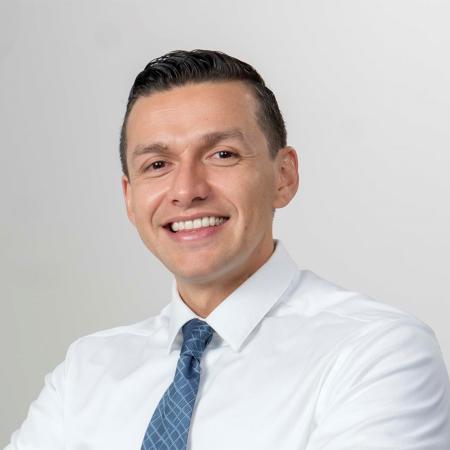 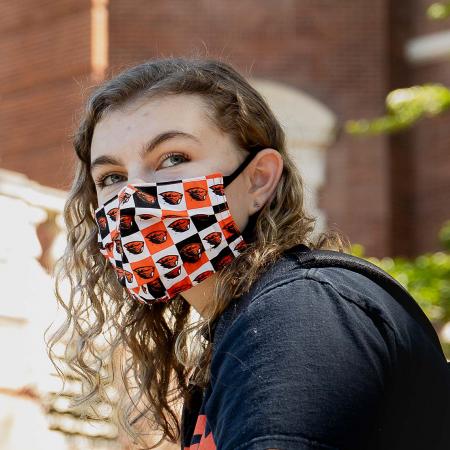